About Equity, Growth, and Community 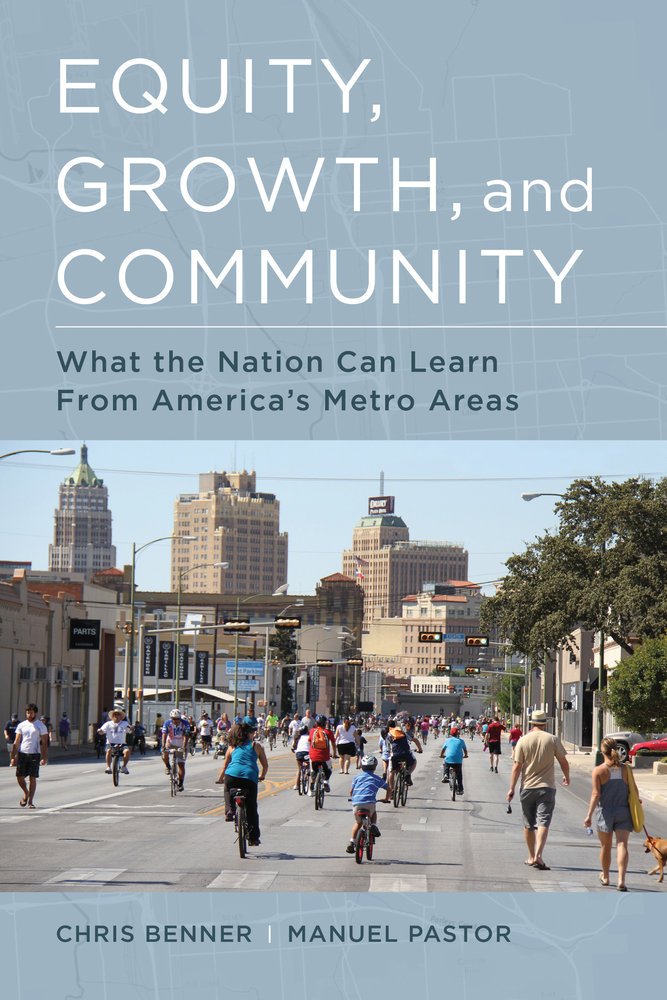 What the Nation Can Learn From America’s Metropolitan Regions

In the last several years, much has been written about growing economic challenges, increasing income inequality, and political polarization in the United States. This new book by Chris Benner and Manuel Pastor argues that lessons for addressing these national challenges are emerging from a new set of realities in America’s metropolitan regions: first, that inequity is, in fact, bad for economic growth; second, that bringing together the concerns of equity and growth requires concerted local action; and, third, that the fundamental building block for doing this is the creation of diverse and dynamic epistemic (or knowledge) communities, which help to overcome political polarization and help regions address the challenges of economic restructuring and social divides.

Benner and Pastor examine how inequality stunts economic growth and how bringing together equity and growth requires concerted local action. Combining data, case studies, and emerging narratives on multi-sector collaborations in 11 metro regions, the book offers a powerful prescription not just for metros but for our national challenges of slow job growth, rising economic inequality, and sharp political polarization.

Learn More About the Book

As America bolts toward a more multiracial future in the face of skyrocketing inequality, local leaders are desperately seeking strategies to foster more inclusive growth. Chris Benner and Manuel Pastor’s research uncovers a critical ingredient of success: diverse regional leaders coming together to build a foundation of shared knowledge and advance positive change.

This book, the latest fruit of a highly productive collaboration between two first-rate thinkers, is both immensely wise and highly practical—a must-read. Benner and Pastor blow apart simplistic ideas about collaborative problem-solving—which tend to stop at reframing or the magic of dialogue—to show how the locally driven process of generating shared knowledge, risk-taking and even productive conflict can generate real progress on the most urgent challenges our country and our communities face.

The conversation doesn’t end when the book is in your collection. Equity, Community, and Growth is a living project that you can be a part of. Follow our Knowing Together, Growing Together blog and be informed when new developments takes place in any of the Metro Regions featured in the book.

Visit our Connect page for more ways to be part of the evolving conversations around the country on equity, growth, and community.

IMF finds that eroding unionization & slipping min wage => inequality. The IMF? What is world coming to? Its senses? http://t.co/Ic70EpZXcN

Washington has the highest minimum wage in America, at $9.19 an hour, but that’s not enough – now, a Seattle campaign is pushing to make it $15. An U.S. Chamber of Commerce study says that a higher minimum wage would lead to low-wage job losses, as business owners would likely cut low-wage jobs altogether in order to save money. However, economist Chris Benner refutes this claim, saying that although small businesses would be more impacted by a minimum wage hike, overall the economy would benefit from an influx of citizens with more spending power.

Chris Benner was invited to participate in a forum to spark a community conversation about the economic ramfications of increasing the minimum wage. This forum, sponsored by the Progressive Women of Napa Valley, is necessary in an area like Napa Valley where more than 24 percent of the population live below 200 percent of the federal poverty level. Benner spoke alongside other experts on the social and economic opportunities that would arise from a minimum wage hike.

In this coauthored article, Chris Benner talks about the affordable housing crisis that has the Bay Area in its grips now. U.S. Bureau data shows that the Bay Area is providing enough affordable housing for its wealthiest residents, but what about the workers who fill the low-wage but necessary service industries? Benner argues that changes in policy and practice can help minimize the displacement of low-wage workers and provide win-win situations for all.